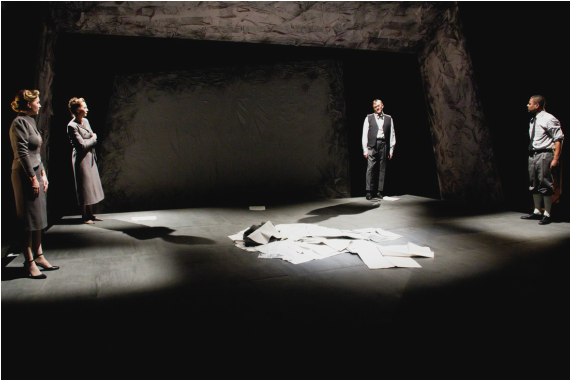 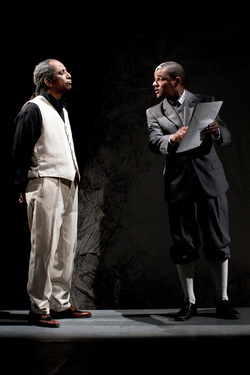 Schwarz Gemacht: Saidiq Bey (Maurice) and Ernest Allan Hausmann (Klaus) photo: Daniel Gentelev
What is “identity”? What makes us who we are? Who has the right to define us?

Set in 1938 Berlin and drawing heavily upon history, the play imagines a story that examines universal questions of self and citizenship primarily through the eyes of a patriotic Afrodeutscher (Afro-German) actor. Proud to serve his country, he appears in propaganda films calling for the return of Germany’s former African colonies. An encounter with an African-American musician and activist leads to hard questions about the treatment of people of color both in Germany and in the United States of America.

Schwarz gemacht (now retitled Schwarz gemacht, or How Klaus Found His Blackness is the first project to move completely through English Theatre Berlin | International Performing Arts Center’s new work development series, THE LAB, to receive a full production. It was part of the Colorblind? series of staged readings examining racial identity on stage in 2012 and a two-week workshop was held in December 2013.

The seeds for  Schwarz Gemacht, or How Klaus Found His Blackness  were planted and it’s journey began in 2005 in Los Angeles, as  I was looking through a high  school year book belonging to my wife,  who is German and works for the German Foreign Service.  I landed on the picture of a black classmate of hers.  I  began to bombard my wife with what I have since come to discover are very typical questions and assumptions about Afrodeutscher,  “Where was she from?  Was she from Africa?  From the island?”  My wife’s impatience grew as she had to repeat several times that as far she knew the girl was German. She grew up in Germany, spoke German, her sensibilities and outlook seemed to be that of every other German kid in her class.  Considering myself at least somewhat of an aware artist, I was kind of embarrassed, frankly, that I had never heard anything about this. This lead me to research the history.  I  found far more than I expected to find.  Out of this initial research  a 10 minute monologue of a fictional black German character  titled Others Within was created, which I performed  in an evening of 10 minute solo pieces in Los Angeles at Highways Performance Space and  then was  invited to perform at an in residence evening of art & performance  by the German Consulate General  in Los Angeles.  It was clear that the piece had more potential than just a 10 minute monologue.  Later that year a 15 minute version was performed for an audience as a work-in-progress  at the Kitchen Theatre in Ithaca, NY.  It was expanded to a half-hour two-hander and had a reading at the Oval House in London. It  was workshopped and developed a little further in the US for one week with the New York Theatre Workshop, before being put on the shelf for a few of years while further necessary research was done. At this point it was unclear if the piece would actually see the light of day until I worked as an actor with director Daniel Brunet in his play reading series entitled Colorblind? at The English Theatre of Berlin.  Also working in the series was Afrodeutscher actor Ernest Allan Hausmann. When I told Daniel and Ernest about my project they both quickly encouraged me to take it off the shelf and Daniel staged a reading of it for the Colorblind? series and this bit of serendipity lead to the production  today.


In her book: Other Germans: Black German and the Politics of Race, Gender and Memory in the Third Reich, Prof. Tina Campt, (whose research has had the most impact on the project) implies that it was the very laws designed to make black Germans marginal that made them identify even more as Germans...as Afrodeutscher.  This for me was the crux of my interest in creating the play. This idea that you cannot really squelch someone’s identity.  You can try but people will innately fight for self-definition.  I did not find it much of a revelation that some black mixed-race Germans would end up in camps or even murdered like other Others in Germany.  I didn’t really see where a piece about that would shed more light on the atrocity of that era. It’s been done with far more authority than I could give it. However  what did compel and fascinate me was finding out that there were black Germans who not only survived but avoided going to camps entirely and had to grapple with their own identify.  I also wanted to make the case that there was no less alienation of black identity in America at that time.  In fact one could make the case that it was even stronger and more defined in America.

So with Schwarz Gemacht, or How Klaus Found His Blackness I am more interested in how one finds  and holds identity and how we use the tools of identity to define ourselves  i.e.- race,  cultural,  where we were born,  who we were born to.  Are these true determinants?  And who gets to determine them?  Does a government really have the right to tell you who you are?  Does a society? 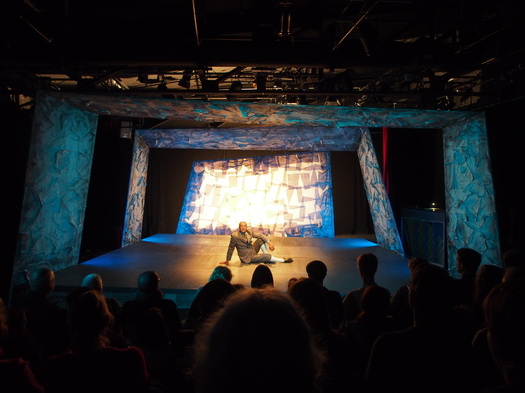