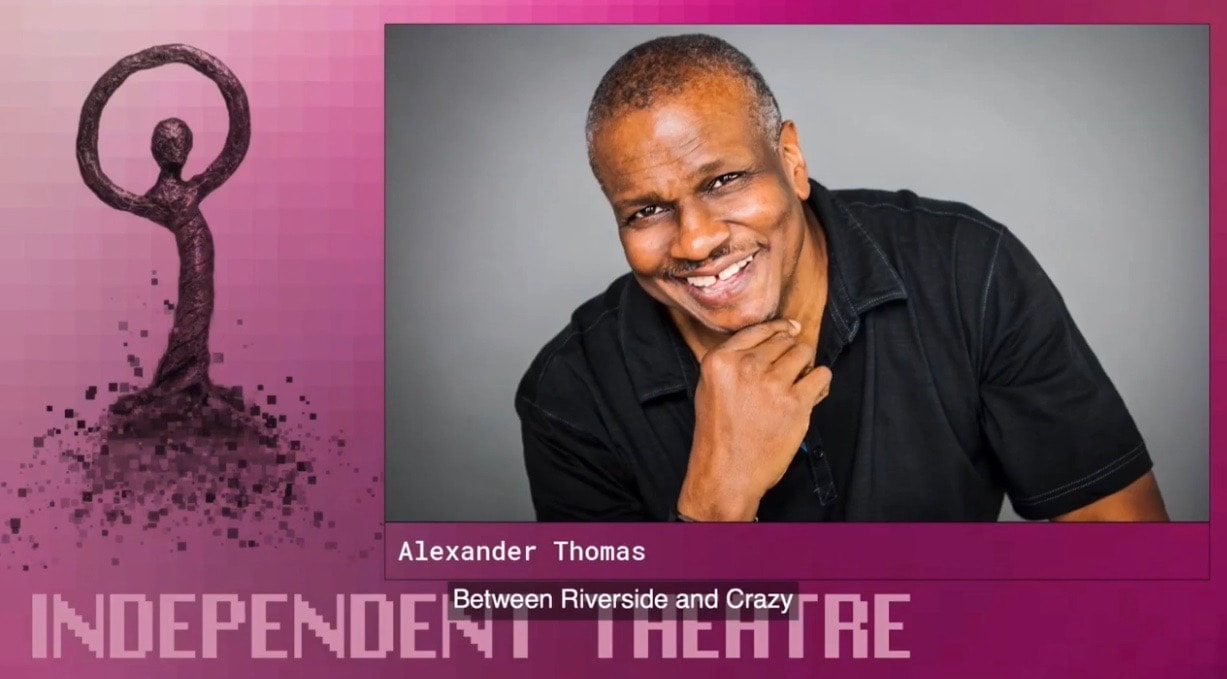 ​Originally from  Albany, New York,  Alexander lives with his wife who works for the Foreign Service and has lived and worked in the UK, Germany and Canada.  He recently moved back to the States  and currently resides in  Astoria, New York having spent the last five years in Toronto where he performed in the Canadian premiere of  THE ROYALE  by Marco Ramirez at Soulpepper Theatre  and the world  premiere of Adam Meisner's futuristic satire FOR BOTH RESTING AND BREEDING at Talk is Free Theatre in Barrie, Ontario.  Just before going into lockdown he managed to return to Toronto  to play the lead role in the Canadian premiere of  Stephen Adly Guirgis' Pulitzer Prize winning  BETWEEN RIVERSIDE AND CRAZY for a SOLD OUT four weeks at  Coal Mine Theatre for which he won Toronto's 2020 Dora  Award for most Outstanding Performance for an Individual in the Independent Theatre Division.  Other Toronto credits include HANGMAN by Jason Maghanoy at the Storefront Theatre, followed  by LETTERS TO ANNEBELLE by Stephen Joffe for the Toronto Fringe Festival, A GIRL LIVES ALONE by Jessica Moss for  Toronto Summer Works Festival @the Factory Theatre, and another play by Jason Maghanoy: THE NAILS also for Toronto Summer Works Festival @the Factory Theatre

He works frequently at Kitchen Theatre Company  in Ithaca, New York (USA) where one year he appeared in  THE WHIPPING MAN by Matthew Lopez in which he played an American slave in 1865  at the end of the Civil War, Micheal Hollinger's OPUS  about a classical string quartet in which he played a cellist who is battling cancer, and BROKE-OLOGY by Nathan Louis in which he played an inner-city father dying of multiple-sclerosis.
He also appeared there in Dominque Morisseau's  SUNSET BABY and Gina Gionfriddo's AFTER ASHLEY.
He recently recreated his role of  Wynton in the Kitchen's production of  THE ROYALE  which also transferred to  The Geva theatre  in Rochester, NY

He Has amassed some impressive stage credits on the other side of the pond as well.  He  was a cast member of Steven Berkoff's stage adaptation of  ON THE WATER FRONT which ran in London´s West End at the Royal Haymarket Theatre, as well as the Edinburgh Festival, Nottingham Playhouse and the Hong Kong Arts Festival.  On The Waterfront won London's “What's on Stage Award" for best Ensemble.

He was seen on stage in Luxembourg City, Luxembourg, playing  the role of Ross in the inaugural production by the Actors Repertory Theatre Luxembourg  of Edward Albee's The Goat or Who is Sylvia?

In Berlin, Germany  he was seen at the  English Theatre Berlin | International Performing Arts Center in UTOPIA/DYSTOPIA an evening of 10 minutes plays as well participating in their COLOR BLIND? series.  A series of staged readings emphasising the cultural diveristy of Berlin's theater scene.


He also co-wrote and performed in BLACK STUFF a two-man farce about African American identity which ran at the Kitchen Theatre, Highways Performance Space (Los Angeles)  and the New York Fringe Festival.

He is one of the contributing writers for The American Slavery Project: Unheard Voices , a theatrical event giving voice to the 419 slaves buried in the unmarked graves discovered at the African Burial Grounds in New York . http://www.americanslaveryproject.org/

His play SCHWARZ GEMACHT * developed from research into the lives of  mixed-race black Germans during the 1930's, premiered in Berlin at  the English Theatre Berlin | International Performing Arts Centre http://www.etberlin.de/  Feb/March of  2014 and was brought back for a second production the following year in the spring of 2015.  It  also received  a staged reading in 2015 in NYC with  The New Black Fest http://www.thenewblackfest.org/ at the Lark Theatre Lab  http://www.larktheatre.org/  ​helmed by director Liesl Tommy (Eclispse)
*(retitled SCHWARZ GEMACHT or How Klaus Found His Backness)
​​
He is was also a recipient of Coal Mine Theatre's  Allan Ray Memorial Scholarship.  A cash prize donated by Natalie Krill in her Step Father's memory, each season to Coal Mine theatre: “This scholarship has been created for an actor on their path who shows passion and commitment to their craft: a little boost along the way." - Natalie Krill

His acting training includes study at the Stella Adler Studio in New York City
and the Miesner Technique with Richard Pinter (former head of the Neighbourhood Playhouse)
Currently he kepts his acting chops in shape working with acting coach Gregory Sims PATH workshop.
​
He studied creative writing at the University of Toronto.

Alexander is schedule to appear in yet another production of The Royale in Feb 2023  This time at The Citadel Theatre in Edmonton, Alberta, Canada, directed by esteemed Canadian director Philip Akin.


What the critics say about Alexander's work:
BETWEEN RIVERSIDE AND CRAZY
"Alexander Thomas shines as the heart of Coal Mine production...the show belongs to Thomas"
- Martin Marrow - The Globe and Mail

" ...language that possesses a kind of poetic rhythm on the page but is sneakily natural when said out loud, particularly within an actor like Thomas who gives Pops a slow thoughtful pace..."
- Carly Maga - The Star

"Pops, played masterfully by Alexander Thomas,  is the heart and soul of the show...an enduring, spirited, can't-take-my-eyes-off-of-you performance"
- Meghan Mooney- Mooney on Theatre

THE ROYALE
"Thomas – a talented veteran actor with an international résumé now based in Toronto – makes the mournful monologue into a moving play within the play."
- J. Kelly Nestruck - The Globe and Mail

"Alexander Thomas’ portrayal of Jay’s coach and friend, Wynton was the heart of this piece for me...His storytelling ability had many audience members in tears."
- Colin Darling - Mooney on Theatre

" (Wynton)  Alexander Thomas plays him as a slow walking, slow talking man who’s worked in the fight game a long time and knows a thing or two."
- Lynn Slotkin- The Slotkin Letter

" Thomas' warm voice is thankfully the main narration behind fights, training, and  guidance to Jay. His monologue is heartbreaking and chilling in its delivery, and gives other famous fictional coach pep-talks a real run for their money. ."
- Isabella Perrone- Broadway World Toronto

" Wry wit, hard-won and weary is the preferred method of Alexander Thomas’s Wynton... Rhythm and authority mark his acting throughout. ."
- Ross Haarstad - Ithaca.com
LETTERS TO ANNABELLE
"The actor Alexander Thomas gives us Louis-Andre, a grand mix of sly negotiator, gentlemanly manners, and a generous heart.... This is one of those noteworthy characters that a gifted actor can awaken, and Alexander Thomas rises to the occasion. He both enchants and repels."
- Burke Campbell- The Indie Critic
SUNSET BABY
"Volcanic fury, mixed with a heart bursting with love, lie concealed beneath the gentle exterior of Thomas's amazing portrayal of Kenyatta.  His deft performance is so economic in its means that he simply seems to exist from one breath to the next, suffusing the play with his presence."
- Ross Haarstad - Ithaca Times


THE GOAT OR WHO IS SYLVIA?
"Thomas is also engaging and wonderfully natural as the sickened friend who is shocked by what he hears..."
- Duncan Roberts - Delano News, Luxembourg

"Alexander Thomas' Ross also has a transition to make: from your more-or-less  traditional joking and teasing 'best friend' to someone whose tolerance flips  back to 17th century Massachusetts, when faced with behaviour that he 'knows is  wrong'.  No flaws in a convincing performance."
- Graham Cleverley-  Wort.lu
OPUS
"Thomas gives Carl a blend of gravitas and humor that makes him seem sensible  and wise, not dull or conservative."
- Bill Chaisson - Ithaca Times
"Thomas’s genial Carl finally roused to righteous anger. (Thomas can make  even a disappointing piece of cheesecake resonant.)"
- Barbara  Adams - Ithaca Journal
﻿THE WHIPPING MAN﻿
"Simon  (the wondrous Alexander Thomas...) encounters Caleb – first taking the Confederate soldier as a looter, and then as  someone sorely in need of medical assistance.   In a span of a few minutes, the  radical change in relationship between the men is depicted with mastery unlike  anything Hollywood could conjure."
-  Luke Z. Fenchel - Ithaca Times

"Simon’s  simultaneous habit to please and will to dream is ­clearly­­  identif­­ied­ through Alexander Thomas’ portrayal of the character...it was clear that the actors were fully devoted to portraying every nuance of their
characters’ identities. -
- San Bromer - The Cornell Daily Sun

BROKE-OLOGY
"Embodied by the magnificent Alexander  Thomas, William King is a man with great emotional depth, who feels as  real as a  next-door neighbor, coworker, or parent. "
-  Luke Z. Fenchel - Ithaca Times

AFTER ASHLEY
"Thomas'  Gavin is slick and insincere, even ruthless when he needs to be. "
- Barbara  Adams - Ithaca Journal

"Here is an artist who blessedly relies on and trusts his natural instincts to deliver a performance that is remarkably focused and carefully controlled with fine nuance."
Joe Szekeres, -Chief Toronto Critic for Onstage Blog
www.onstageblog.com

"...a  theatrical memoir by Alexander Thomas... in addition to telling his own tale, Mr. Thomas (that is, the grown-up  Alex) delivers monologues in the guise of his father and all three of his  brothers. And the result is a portrait of a father's poignant legacy and what  struck me as a dead-on depiction of how a family diverges from a center"
-Bruce Weber - The New York Times

"It is remarkable how entertaining and  satisfying Thomas's memoir is... Stuffed with big themes and memorable
characters."
--David   Cote, Time Out New  York

"Thomas energizes every square yard of the  stage, like a tennis player volleying every emotion in the text across to the  audience..."
-James  MacKillop, Syracuse  NewTimes

" Thomas  conveys to us what it meant to be a black man in Alabama in 1933, more potently  than I've ever witnessed... He tells his story with affection, humor and  pride."
-Martin  Denton, NYTheatre.com

"His  multiple portraits show how intricately our individual identities are tied to  family."
-Barbara  Adams, The Ithaca  Journal

"... heartfelt, riveting coming of age tale..."
"Just when we think we might have everyone "figured out," the writing takes a deft turn."
"He awards his subjects humour, liveliness, and a sharp take on their circumstances. "
- Ross Haarstad - Ithaca Com

THROW PITCHFORK IS PUBLISHED AT :  http://www.playscripts.com/ 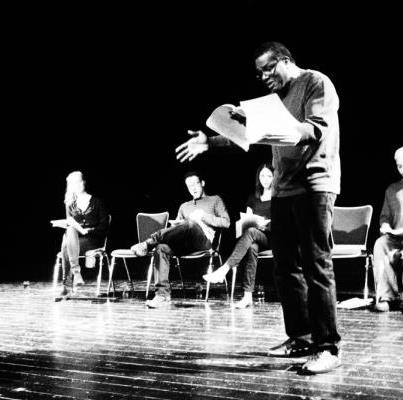